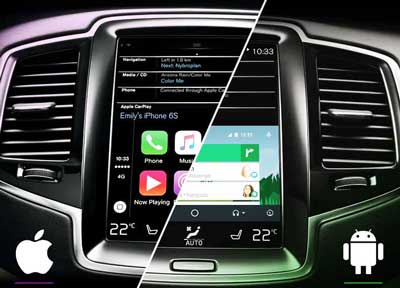 or a long time now automakers have been seriously trying to recreate on the car dashboard the smartphone experience, but have failed in most cases.

Android Auto and Apple CarPlay were born in 2014. The aftermath of these new technologies hitting the market was rendering desolate the development and engineering by car companies which cost millions.

This smartly done by the respective smartphone integration platforms; Easy access to your music, maps, messaging apps, and most phone functions will be displayed on the in-dash screen depicting their already familiar UI once your smartphone is connected.

This tech was widely welcomed and went viral because almost all automakers applied the Apple CarPlay and Android Auto. The aftermarket vehicle stereo reacted to this development by ensuring that the consumers don’t have to purchase a new vehicle before enjoying this new technology.

Not to be too excited,

For consumers with a Single-DIN radio, to enjoy this tech, you must be willing to perform some severe constructive work or more suitably placed ‘surgery’ to your car to ensure a bigger aftermarket head unit will fit comfortably into your dashboard.

This problem was however sorted out by some companies which the most prosperous was the Pioneer company. They released into the market series of aftermarket single-DIN head unit that both features the CarPlay and the Android Auto with a slide-out display screen.

The most proficient brands of this tech are the Pioneer AVH 3400NEX which is the latest brand than the AVH-3300NEX single-DIN head unit.

We are going to review these two products and find out what is different and which one is best for you. 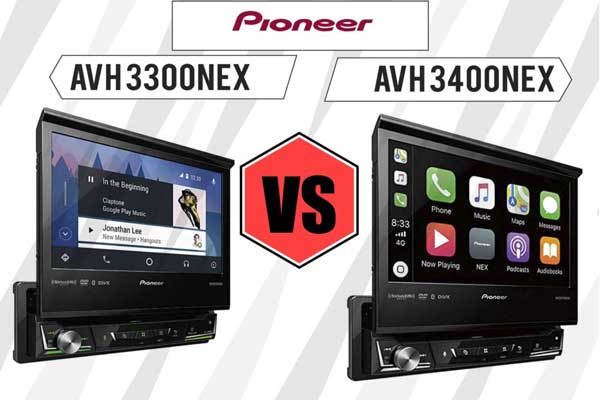 We have reviewed these two slightly different Pioneer products, and now it is time to compare them both. In my honest opinion, I don’t think there is much difference between these products; even its official prices are much different.

They’re both single-DIN car media platforms, and both features the Android Auto and Apple CarPlay, both features Mitrax, Pandora, SiriusXM, Siri Eyes, Bluetooth, and hands-free connection features, these are just to name a few.

Could there be a difference in their energy consumption?

Or a touch screen size?

Or even responsiveness to compatible devices?

We will compare these two products with the aim to look for slight differences.

We’ve concluded this article about two excellent products from the Pioneer company. The comparison table as you can see doesn’t show any differences between the two products. So now you will be anxious about what is the difference between these two, right?

Most times the saying “what you pay is what you get” comes into play in most realities, and this evident in most markets and other industries.

Taking a peek into the aftermarket head unit with the logic mentioned above.

It sounds reasonable that a product which costs higher should be loaded with lots of features than that which costs lower, but the Pioneer AVH-3400NEX car multimedia receiver is a very cost-effective aftermarket head unit which defines the above logic.

The Pioneer’s NEX series has other flagship products as relating to aftermarket head unit. It comes loaded with an impressive list of features.

The NEX series is famous amongst aftermarket head unit fans because of its integration Apple CarPlay and Android Auto feature into one box.

When it’s being connected to a compatible device, 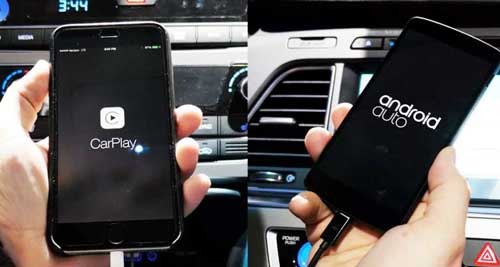 Connecting your Android lollipop or later version smartphone to this device, it will activate the Android Auto software on the host phone;

this includes a one-time setup on the host Android smartphone which installs not just the Android Auto app but also other needed features.

This functionality ensures this product to be able to utilize compatible Android devices.

We’ve discussed its Android integration, let’s see that of the iPhone household.

The 3400NEX when connected to a compatible iPhone device which usually devices is running on iOS versions greater than 8. The 3400NEX boast of identical features with its AVIC siblings in scope and operations, though it has a smoother process when compared to its Android counterpart.

I think it’s more related to the respective platforms and not the Pioneer device itself, this device and Apple seems to be a plug-and-play affair.

both platforms are evenly matched when it comes features and delivering its services.

Many tech-savvy aftermarket car head unit enthusiasts would agree that this device is smartphone focused.

But that isn’t all this device boasts about, in fact, it prides itself with many reputable sources for video and audio connectivity.

A good example is a remote control, radio tuning feature and best of all; a concealed optical drive which supports, VCD, CD, and DVD playback.

Even if you are using an iPod, it can still be used by this device, plug it in and feel the music. It also has provisions for a USB drive, because the receiver supports WAV, FLAC, WA, ACC, and MP3 audio on optical media or USB. For the Video, it supports MPEG and DIVX.

Being a smartphone centered device without a Bluetooth connectivity feature is uncool right? Well, this device doesn’t disappoint either in that aspect.

Integrated with hands-free calling, it doesn’t stop there, it can also be upgraded to SiriusXM which proves why we said the 3400NEX is fully studded with features.

More so, this device features detachable face security to spice up more your curiosity on this Pioneer AVH 3400NEX device.

The screen supports multi-touch pinching and zooming and is relatively smooth in operation. If I’ve one nit to pick, it’s that sometimes scrolling through long lists of options can be finicky.

Fortunately, there aren’t many places in the interface where you’ll have to do so.

With that being said, it is easy to understand the confusion in the current market today amongst the consumers of these products. Here we will review the AVH-3300NEX to see if there is a significant difference it has new its other sibling.

Design and Some Features 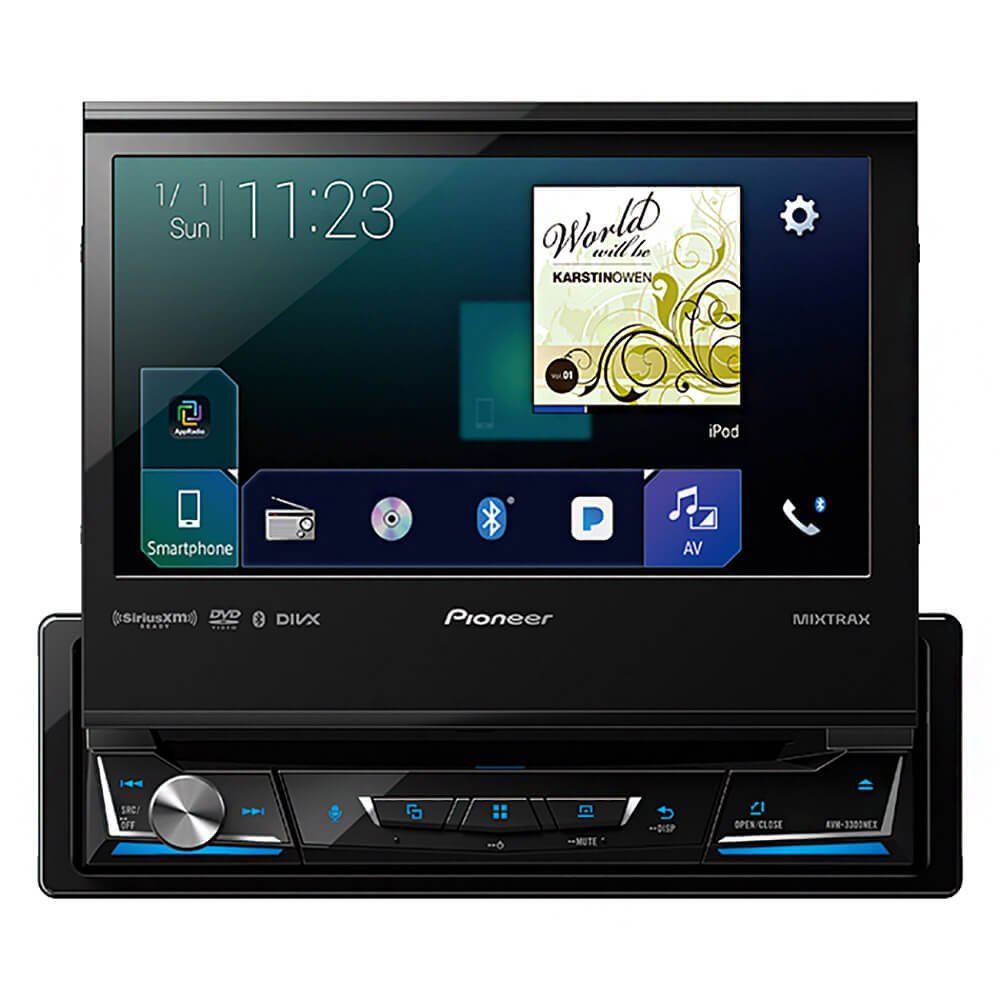 The Pioneer AVH-3300NEX is a single-DIN radio integrated device. (Note: the amount of dash slots is known as DIN.)

there is a need for the host vehicle ensure there is enough room to fit this 7-inch touch screen device to carry out its operations without interfering with the car’s controls.

It should be noted that just like the 3400NEX this model also features a motorized angle adjustment to ensure that it can be operated with ease and it is also a safety precaution.

This Pioneer brand allows for hands-free calling and voice commands with its integrated microphone, even though it has the physical remote control.

This product has an additional security measure in the event of theft. It possesses a detachable (partially) faceplate. It also comes with a resolution of 800 x 480 pixels and varying display colors to choose from, even a splash screen with an automatic dimming feature to care for your eyesight.

Even though it uses the resistive touch feature for its screen, the AVH-3400NEX touch screen is responsive. It possesses a volume knob with a radio tuning button flanking it at both sides. There are equally other hard buttons which have other vital functionalities for easy use.

I know you must have been wondering when I’m going to talk about the most critical feature that separates the Pioneer NEX products from most other aftermarket car head unit manufacturers; The Apple CarPlay and the Android Auto.

Well, it’s just almost like we have reviewed above, there isn’t much difference if there is any between the Android Auto and Apple CarPlay features of this AVH-3300NEX and that of AVH-3400NEX. They’re both the same. This product also features the Pioneer’s AppRadio which ensures the control of some smartphone apps which Waze app is a good example.

We want to make it clear that there are various aftermarket car radios in the market today which provide ease of access to both audio and video streaming sources.

However, the 3300NEX stands out because of its smartphone integration features of Apple CarPlay and Android Auto.

These features work almost effortlessly with every compatible connected device.

We’ve seen most of the features of this product that we briefly explained, and we will now move to see its compiled list of features, pros, and cons.

but their features remain the same, though someone might argue that AVH-3400NEX is better since it’s a newer version because of tech and software upgrades for more pleasant user experience.

But this isn’t mentioned in the Pioneer official website of these products, so we can’t use that as a difference either since it isn’t certified.

However, the final choice will always rest on the consumer, which would you go for?

You can drop your answers in the comment section.